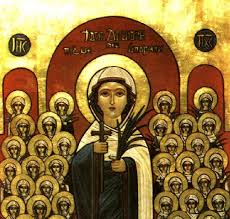 January 21, 2022 Toba 13, 1738 The Martyrdom of St. Demiana. On this day also, St. Demiana was martyred. This chaste and fighter virgin, was the daughter of Mark, Governor of El-Borollus, El-Zaafran, and Wadi Al-Saysaban in the Northern delta of the valley of the Nile. She was the only daughter to her parents. When she was one year old, her father took her to the church of the monastery of Al-Maymah. He offered alms, candles and oblations so that God might bless her and keep her in His care. When she was fifteen years old, her father wanted her to be wed. She refused, and told him that she had vowed herself a bride to the Lord Christ. When she saw that her father was pleased with her intention, she asked him to build her a place where she could worship God in seclusion with her virgin friends. He fulfilled her wish and built her the house that she wanted. She lived in it with forty other virgins. They spent their time reading the holy scripture and in worship. Shortly after, Emperor Diocletian sent for Mark, St. Demiana’s father, and ordered him to worship the idols. He refused at first, but after the Emperor appeased him he obeyed his order and worshipped the idols and forsook the Creator of the Universe. When Mark returned to his official seat, and St. Demiana knew what had transpired, she rushed to meet him. She did not greet him, but said, “What is it that I heard about you? I would have preferred to hear about your death rather than to hear that you have renounced your faith and forsaken the God Who created you from non-existence into being, to worship gods made by hands. Take note that if you do not return […]