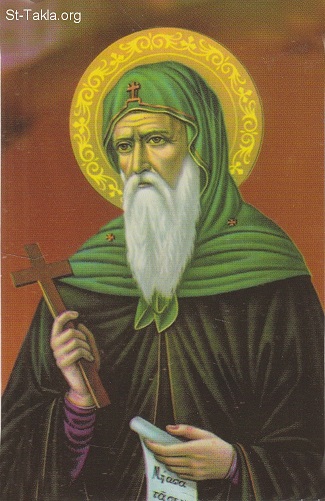 January 31, 2020 Toba 22, 1736 On this day, of the year 355 A.D., St. Anthony the Great, the star of the wilderness, and the father of all monks, departed. This righteous man was born in the year 251 A.D. in the city of Qimn El-Arouse, to rich parents who loved the church and the poor. They raised him up in fear of the Lord. When he was twenty years old, his parents departed, and he had to take care of his sister.Once, he entered the church and heard the words of the Lord Christ in the Gospel, “If you want to be perfect, go, sell what you have and give to the poor, and you will have treasures in heaven; and come, follow Me.” (Matthew 19:21). He returned to his house, decided to fulfill this commandment and considered it directed to him personally. He gave his wealth to the poor and needy, and he took his sister and placed her with some virgins. At that time, monasticism had not yet been established. All those who wanted to live a solitary life went and lived on the outskirts of the city. This was what St. Anthony did as he dwelt alone, worshipping and living an ascetic life. The devil fought him there by afflicting him with boredom, laziness, and the phantoms of women. He overcame the devil’s snares by the power of the Lord Christ. After that, he went to one of the tombs, and he resided therein and closed the door on himself. Some of his friends used to bring him food. When the devil perceived his ascetic life and his intense worship, he was envious of him, and he beat him mercilessly, then left him unconscious. When his friends came to visit him and found him in this […]