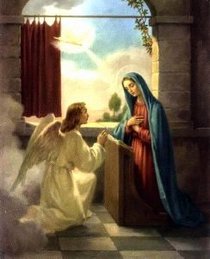 April 7, 2020 Baramhat 29, 1736 On this day the church commemorates the Annunciation of our Lady, the Theotokos, the Virgin St. Mary. When the appointed time by God since eternity for the salvation of the human race had come, God sent Gabriel the Archangel to the Virgin St. Mary, who is from the tribe of Judah the house of king David, to announce her with the Divine conception and the Glorious Birth as the Holy Scriptures testifies: ” Now in the sixth month the angel Gabriel was sent by God to a city of Galilee named Nazareth, to a virgin betrothed to a man whose name was Joseph, of the house of David. The virgin’s name was Mary. And having come in, the angel said to her, “Rejoice, highly favored one, the Lord is with you; blessed are you among women!” But when she saw him, she was troubled at his saying, and considered what manner of greeting this was. Then the angel said to her, “Do not be afraid, Mary, for you have found favor with God. “And behold, you will conceive in your womb and bring forth a Son, and shall call His name JESUS. “He will be great, and will be called the Son of the Highest; and the Lord God will give Him the throne of His father David. “And He will reign over the house of Jacob forever, and of His kingdom there will be no end.” Then Mary said to the angel, “How can this be, since I do not know a man?” And the angel answered and said to her, “The Holy Spirit will come upon you, and the power of the Highest will overshadow you; therefore, also, that Holy One who is to be born will be called the Son of […]